For the workshop, we needed to bring along a crime-related short or novel, so I decided to bring along my WIP, a crime novel about a struggling writer called Violet Brown who is jealous of her famous author brother, Simon, who writes a popular crime fiction series recently hijacked by a real-life serial killer.

At one point during the workshop, we were given a small writing exercise. When we were done, Parry asked if we would like to read our work to the group. Despite being nervous, I jumped at the chance to have a seasoned professional point out my mistakes. Because hey, we only live once! And I could always go find a nice rock to live under afterwards.

After reading my piece, Parry told me I ‘needed to go deeper’. I didn’t quite understand what she meant, so she gave me a few examples of how she would reword my sentences. I wrote down her edits and updated my paragraph.

Then it hit me like a bolt of lightning.

Okay, that’s a lie. It dawned on me, slowly.

Up until that moment I had been committing the biggest writing faux pas of all. The one I thought I had long since ditched in my past and left behind in a flurry of dust.

And no, it’s not the adverb rule.

I was telling, not showing.

I’ve always known I had a problem describing scenes, but this was the first time I could really see what I was doing wrong. I was blown away, to be honest. I can’t thank Parry enough for showing me the light.

What I learned from Parry is that while there are the obvious ‘tells’ you need to avoid, like: ‘she started to walk over to him’ ‘she looked’, ‘she felt’, there are also plenty of other less obvious ways we ‘tell’ that we might not even be aware of. For example, I had been using the word ‘was’ in almost every single sentence!

This realisation has changed my world – I even think my brain may have been re-wired! I can no longer read my past novels without shuddering in horror whenever I spy the words ‘started’, ‘was’, ‘looked’ or ‘felt’. My novels are littered with them. There is no escape.

I’ve always been anti-rules, adamant that the only way to become a ‘good writer’ was through the very act of writing itself. While I still subscribe to this view, it’s clear, almost one million words down, that soaking in a few writing rules every now and then could be exactly what my writing needs to improve (a.k.a Stephen King’s adverb rule from On Writing). 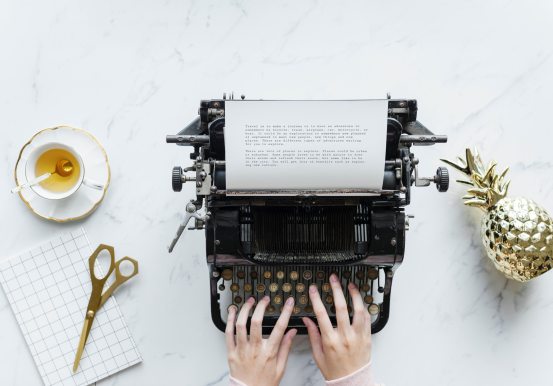 Here is my own example of telling v showing:

Telling: Violet, trembling in fear, watched as Peter was tackled to the ground by Jack. The gun went flying and landed at Violet’s feet. With shaking hands, she reached down for the gun. She’d never used a gun before, but if she wanted to save Jack, she would have to use it.

Showing:  Jack tackled Peter from behind and they tumbled to the ground. The pair struggled, fumbling for the gun. Jack, taller and heavier, had the upper hand and pushed the gun away from Peter’s grasping fingers. It glided over the smooth, marble surface and came to rest at Violet’s feet. She crouched down and brushed her fingertips over the cold, black surface of the barrel. On the other side of the room, Jack groaned. The tables had turned and Peter now had him in a headlock.

Violet took a deep breath and wrapped her fingers around the handle of the gun and brought it to her chest, her index finger hovering near the trigger. Jack and Peter were a moving tangle of arms and legs. What if she hit Jack? What if she killed him?

Violet closed her eyes and pulled the trigger.

Okay, so that’s not the best example (and who the hell would close their eyes before pulling the trigger of a gun??), but I’m still figuring out this whole ‘show don’t tell’ thing. It might be another 100,000 words before I get the hang of it!

But as they say, practice (plus a few writing rules) makes perfect, right?