I used to pay out anyone who participated in NaNoWriMo, thinking that anyone who took part wasn’t a real writer. Why the hell would you wait until November to write a novel? Why not write one now, whether that ‘now’ is May or August? I was someone who used to write every day, and scoffed at anyone who thought joining a mass-writing event was cool. Until the day came that I couldn’t write.

I’ve probably mentioned this story many times, but long story short, I endured a fair bit of rejection in relation to my second novel and in the end I lost the will to write. Coincidentally, all this happened around the end of October last year when my WordPress reader was being flooded with ‘NaNoWriMo’ posts. They were like pesky mosquitos, and no matter how hard I tried to swipe them away, they kept on swarming.

I decided I didn’t really have much to lose and the thought of writing a brand new novel was really attractive to me at the time. I could hardly look at my second novel without shuddering.

But what to write?

Considering my mood was slightly black, I eventually came up with a twisted psychological thriller involving lots of murderous revenge – just what my crushed heart needed.

During that glorious November back in 2016, I managed to write 30,000 words of my novel The Other Pretty One, which is now around 70,000 words and counting (I’m in the editing process).

Even though I didn’t get to 50,000 that year, NaNoWriMo made me accountable to the one person that should matter in this game – me. It didn’t matter if I didn’t make the 1,667 words a day, what mattered was that I wrote every day for an entire month.

OK… so there was this one day where I wrote one single, solitary word, but that’s beside the point. Thanks to NaNoWriMo, I was shoved out of my all-too-comfortable ‘I don’t feel like writing’ slump, and was thrown back into the #WritersLife.

And I was no longer afraid to write.

By the 1st December, I still wasn’t completely healed, and I’m not going to lie, it took me a few long months to stabilise my writing legs and finish my first draft. Thankfully, I soon recovered the joy of writing again – it had never truly left, and I don’t think it ever had. Joy was sitting there waiting for me to return, all this time.

This year I’m working on a new novel called The Fear (ironically), a speculative fiction/romance thingy with a twist: what if you feel in love with someone who didn’t even exist?

This is the really bad cover I’ve come up with for inspiration (please note the Canva watermark): 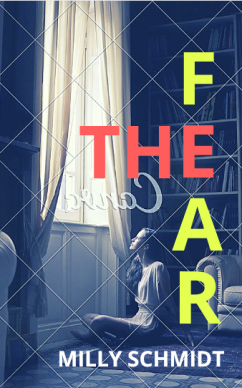 I’m up to about 4,000 words, but I’m in no way gloating. I usually start strong until plot dynamics throw a spanner in the works and the next minute it’s Christmas and I’m nowhere near 50,000 words.

To all the other brave NaNoWriMo souls out there, I’ll see you on the other side!