My blog is littered with seriously un-literary like cat gifs (and which I will not forgive), so I thought I’d write about something serious for a change – and why not review a play, say PROOF, the 2001 Pulitzer Prize winner by American playwright David Auburn?

I found out from my college friends that PROOF was being presented by ADMS at the TAS Hoskins Centre with Warren Bartik to direct. I’d already seen the 2005 film adaption, directed by John Madden and starring Gwyneth Paltrow as Catherine and Anthony Hopkins as Robert and I still remember how the twist came as a total shock to me, so I was happy to jump at the chance to see an Australian interpretation.

The night started with a compulsory drink 10 minutes before the show, drinks which were then hurriedly thrown into plastic glasses so we could take them into the auditorium – definitely added a touch of Aussie class to the evening. 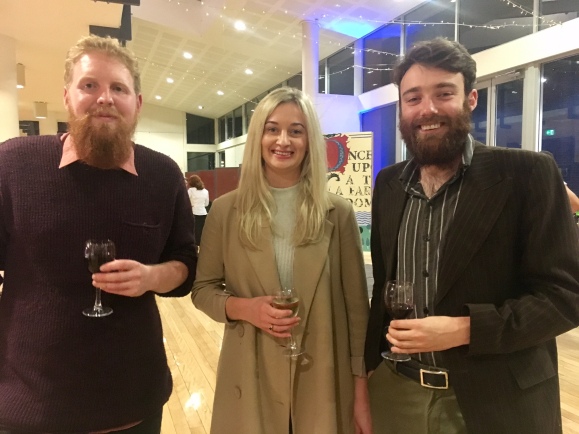 Beans, Me, Jose. Lotsa wine… maybe too much wine…

While trying to covertly sip my wine, the performance began, my eye immediately drawn to the Australian set design – complete with a run down weatherboard home with a corrugated iron roof and miniature verandah. It wasn’t at all what I was expecting. It all looked so professional. No papier-mache props here.

At intermission, and while enjoying our second obligatory wine and discussing the surprising twist, I discovered I was at a bit of an advantage – I was the only one out of my friends who had seen the film and therefore knew exactly what was happening.

We took our drinks in the for the next act and had a great time laughing at the comedic timing of Sarah Watson (Claire) and Amy Roff (Catherine) – this could have been the wine, but I’m pretty sure it would have been f***ing hilarious regardless. The entire audience was in stitches at Watson’s portrayal of hung over Claire – I could almost feel her pain.

It was just so real and funny and relatable. There were quite a few New England related references thrown in that the rest of the audience also appeared to understand based on the decibel level of the laughter. I mean, who would ever want to move to Coffs Harbour!? Like, really? (Yep sorry, most of you guys won’t get that).

Diretor Warren Bartik and his team have done an amazing job and there were exceptional performances all round (how do they learn so many lines??) Jacob Hunt (Hal) was geeky to a tee, and Greg Balcombe (Robert) reminded me of Anthony Hopkins. Oh… and there was also a lot of kissing. Like a lot, a lot. I really can’t say much more than that because I am quite clearly a newbie when it comes to reviewing plays – there’s probably a lingo bible out there that I’m not yet privy too.

I can’t think of anything I didn’t particularly like, besides some of the blue lighting that gave me double vision – but I was the only one affected, so perhaps I need to go see the optometrist.

I managed to catch the cast at the end of the performance, and they were more than happy to pose for a photo, kudos to the director for rounding them up so quickly!

PROOF has been the winner of numerous awards since it debuted on Broadway in 2000. There are numerous themes throughout the play including mental illness, heredity, family, and trust.